This is a summary of the Q&A Livestream regarding Train Sim World 2 written by Nina and Mika from the Train Sim World Community Discord Server.
This has been transferred from the old system and exists here merely for completion sake. No other edits have been made to the article.

It was the first route for TSW back in the day, it was the only route that never made it to console. Console players really wanted to get that experience.

You won’t see that much. But the route has got new distant foliage for hills.

The old system for landscape materials was too much for consoles to handle.

No. The new techniques require the engine update.

No, it will be an overhauled route for TSW2.

Yes, all gameplay content and the all yards and branches will be included. There are more things added to it and improved though. A new journey mode has been added. New journey modes will be set up differently to replicate a “career” mode, so the player gains route experience bit after bit.

Trees had an optimization where the scenery looks the same, but the game performs better

Yes. At the start, there will be a pop-up which shows vital information like which train you’re driving, how many wagons you have, etc.

Information on that will be in a later Q&A, when things are more certain for DTG to mention.

DTG changed some start-up sequences for the locos. Generally, locos on SPG are now how DTG would make locos currently. They look the same as before, but work and perform better. Screens in the AC4400 have been improved.

On average, people didn’t like that. Formations would look odd and cars weren’t loaded. All of the stock on SPG now has weight calculations. That means there will be a consistent variety of formations and no random formations anymore.

Long consists on consoles are now 40+ cars long. That means around 5,200 ton heavy trains. On PC, consists will be “slightly longer”.

Helpers are locos that couple up to the rear of a train to help it going up the grade. Locos couple on at Cumberland, couple off at Sandpatch Summit and then go down again as a light loco move.

While most services in service mode will have 2 locomotives at the front, some will also additionally have 2 at the back while other trains have 3 or 4 locomotives up front.

Yes. It will be drivable for most services.

There has been a partial sound engine upgrade. Reverb effects should be better now. Loco sounds are the same as before, albeit remixed.

No switching, only A to B. Helper locos can be set up in formations. You can’t put down static stocks in sidings, etc. 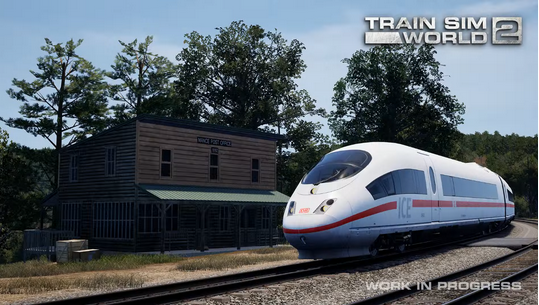 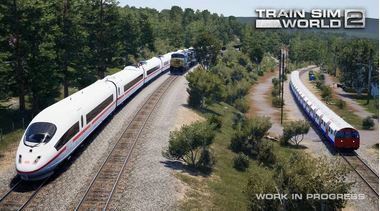 By default, the scenario planner will only let you put down trains that are appropriate (electric trains on electric routes only, etc). There’s a tickbox that removes that limitation. It overrides the power option and you can drive every train type on every route type.

Yes, Simugraph has been optimized for consoles and that enables longer train formations.

You can have a variety of liveries for the waggons. The game can use those randomly on separate cars.

With the statistic pop-up (see 8), you can have more insight into what you’re hauling. The pause screen has been added an overview screen that shows all relevant information (where you are, where to go, when to be there, vital information).

It removes the grip. Particularly in wet or snowy conditions, the train will slip and slide on the rails. Wheel slip protection has been added to trains. If you’re slipping too much the wheels will begin to spark. Sanding works for many situations, but not all. Sand will not have visual or audible representation in the game. Locos have unlimited sand.

Braking characteristics have been reworked and it’ll be harder to brake.

Not currently. This may be added based on user feedback.

Eight. Same as before.

No, because the AI can’t start locos properly yet.

Yes, there are more than 10 switching services. “Cumberland is quite busy now”.

Coal services are now more realistic, for example now running around the train to get to the mine for loading.